Hello again folks, I hope you’ve all having a lovely Friday!

So as you may have noticed in my previous review of Yallah, they reached out to me on Twitter after the review went up and one thing they mentioned was that they’d had a quality control issue with their roaster which might have impacted the beans and so they sent me another bag to try.  As a reminder, here’s what the bag/beans look like. I didn’t bother to take a new picture as the only thing that had changed was the roasting date. 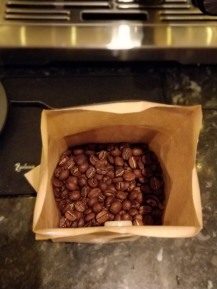 Well, the bag arrived, I tried it….and I can say that whatever QC issue they had, they’ve solved it.  This stuff was amazing, everything I’d hoped the first bag would be.  Now at my end the only thing I’ve changed is setting my grind a couple of clicks finer.  The Ancoats beans seemed to come out quite coarse at first so this may also be impacting the taste of the Yallah coffee.

That sour note that spoiled the cup for me before now? Gone. What I got instead was a rich, chocolatey cup of coffee that was so good I went through the whole bag in a week and was actually rather disappointed when I reached the end.  Again, this is one that tasted better to me just in hot water than hot milk. It’s still good as a latte, don’t get me wrong, but for me it was way better as an americano with those chocolate notes coming through lovely and strong.

My thanks to the fine folks at Yallah for sending me another bag, you can be certain I’ll be ordering from them again and I’m very happy to be able to update my review as a now very satisfied customer.