Good morning, good afternoon and good evening everyone, and today I’m back with a bit of a story for you.  Today’s roaster – Green Hippo Coffee – will need some explanation, and a couple of caveats.

I found Green Hippo following a simple google search for “Hertfordshire coffee roasters”.  My initial attempts to order coffee from the site…didn’t go so well.  Down below is a screenshot of the site as it currently stands and it’s assumed that nice, clean third-wave coffee look that’s quite popular at the moment. I have no issues with this at all, I like a nice, clean and simple look to a site. 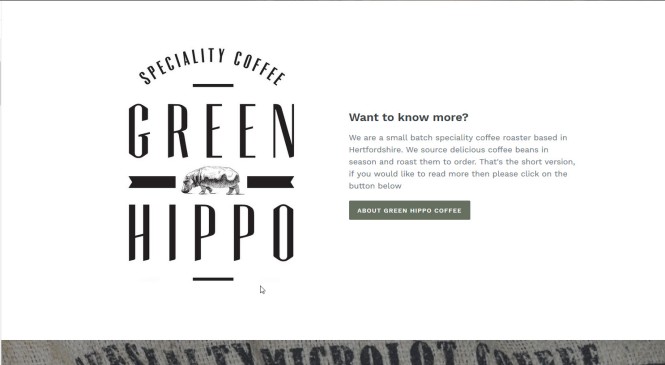 Sadly, I don’t have a shot of the site as it was when I tried to order, but it was nowhere near as nice as this, with a lot of the coffees lacking any details, such as the seasonal espresso that I was looking to purchase that had no information on what varieties went into it.  So, I called up the number on the site and after a little bit of phone tag got talking to a very nice chap called Sello who runs the site who seemed slightly startled that I’d found him as he doesn’t go out of his way to advertise the site.

I explained the problems I was having with the ordering and he admitted that the site hadn’t been his primary focus because at the moment he’s working on a new business, looking at getting a new cafe/roastery set up but he apologised for the problems and asked me to give him the weekend to get the site up to snuff.

Monday rolled around, and things were still a bit dicey so I called up again and he admitted that it’d been so long since the site was updated, the underlying template had been updated and now a lot of the images were broken.  Doh!  Rather than make me wait longer for him to sort the site out, he instead offered to send me a bag of the seasonal espresso free of charge, which was lovely of him.  So thanks again for that, mate!

Currently Green Hippo offers nine different coffees with selections from Brazil, Guatemala, Colombia, El Salvador and Kenya as well as the Seasonal Blend though at the time of writing this two of the Brazilian ones are sold out.

Prices range from £6.50 to £7.50 for a 250g bag and shipping for a single bag is the very reasonable price of frrrrreeeeeeee!  Can’t ask for better than that.

So.  A couple of days passed and my coffee arrived.  So with all the background stuff out of the way, let’s discuss the actual end result. 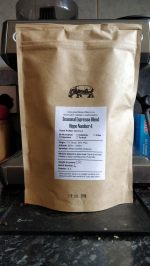 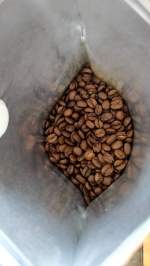 First up – Packaging props!  My beans arrived in a flat packed cardboard sleeve that fit easily through the letterbox so no faffing around with having to be in, or go to the sorting office afterwards.  The bag is resealable, with all the information you might want clear on the front.  Big thumbs up on this, my penchant for resealable bags is likely well known by now.

So what about the actual coffee? Y’know what? It was…fine.  Just fine.  In the past I’ve somewhat struggled with how to describe coffees like this, ones where there’s no particular flavour note that massively dominates, but now I think I know how.

You know what this tastes like?  It tastes like coffee, and that is not a bad thing by any measure!  For someone just dipping their toes into the whole artisan coffee thing, who doesn’t know their way around an SCA tasting wheel, someone who just wants to start to see what all the fuss about fresh-ground coffee is?  This is a bloody good place to start.

Slightly sharp when made with hot water, it’s lovely and rich as a latte and…yeah. It’s a very coffee-flavoured coffee so if you’re just starting your journey into this whole “third wave coffee thing”, you could do a whole lot worse than giving Green Hippo some love and some money!

TTFN folks.  I’ll be back in a bit with another real-life shop review.