Hello again folks, we’re back with another real life review.  We spotted this on the shelves of our local orange-branded supermarket and I couldn’t resist picking it up. 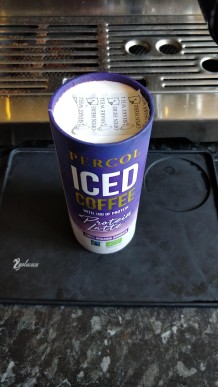 Percol Iced Coffee Protein Latte. It doesn’t quite trip off the tongue but it certainly tells you everything you need to know.  In case it needs to be restated here, this is something that’s definitely meant to be drunk cold though as it’s made with UHT milk it can be stored in a cupboard if fridge space is a problem for you.

This came in a box of four for, at the time, an offer price of £4 which is quite reasonable. I believe at full price it’s £5.50 which is a little much for me, I’m not sure I’d want to pay much more than a pound each for these as they’re on the small side (225ml) but that’s just me.

On opening the pack the first thing you discover is that these aren’t actually cans, they’re cardboard, like a carton of milk. They seem robust enough for what they are, though I wouldn’t want to put one of these in a bag where it might get squashed as the only thing holding it closed is a stick-on plastic label over the opening.  I think that’s just asking to have your bag coffee scented for the rest of its life.

My track record with protein-enhanced food & drink has been a bit hit and miss, with as many good things as bad.  The weirdest was definitely a protein pizza where they’d added pea protein to the base.  Problem was, it just meant you had a pizza that tasted really noticeably of peas.  Sweetcorn is one thing, but peas in/on your pizza is just not right. Not right at all (and don’t even get me started on pineapple).

So by now you’re probably wondering what I was at the time – What does it taste like?  I’m happy to report that it tastes like coffee, no peas here.  Phew.  It’s thicker than you might expect which was slightly off-putting on the first sip, almost like some sort of coffee milkshake.  It’s sweet and rich, the coffee strong but not overpowering, no hint of harsh or burnt notes and thought the cans are quite small, it’s surprisingly satisfying as it’s so thick and sweet. Honestly, it was a really pleasant surprise and something I’d happily buy again.

After a workout this might be a handy way of getting a quick protein boost but it does come laden with sugar, 19g of it to be precise per 225ml serving, which is WAY more than a similar amount made up using my Gold Standard Whey powder which comes out to just shy of 9g of sugar.  Just something to bear in mind if you’re being calorie conscious.  If you need protein, make these an occasional thing unless you KNOW you’re going to be burning off all those carbs as well.

That’s it for this one, folks, something a bit short and sweet for you all.  I’ll be back again soon with another review.