That’s right folks, today is a twofer!  I realised I was falling behind in my reviews a bit so it’s time to get caught up.

Bean Smitten is a roastery based in East Sussex, founded in 2014 by Accountant turned Roaster Darren Tickner and they sell to both home and local businesses as well as being a distributor of Sanremo coffee machines.  As an aside, even though I know I’d likely have to take out a second mortgage to afford one, their Cafe Racer coffee machine is a thing of absolute beauty.   I was lucky enough to get up close to one at the London Coffee Festival earlier this year and just…yum.  So gorgeous.  Anyway, we’re here to talk about Bean Smitten and their coffee! 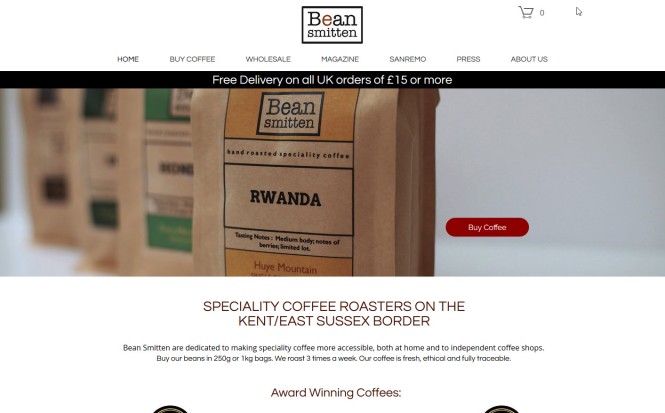 A nice, straightforward site design, the “buy coffee” link nice and obviously placed.  They could do with updating the “press” section, though, as there’s been no update there since Feb 2015!

Bean Smitten have a grand total of eleven coffees on offer at the moment, with four being blends and the other seven being single origin.  One of these is a decaf coffee, using the swiss water method.

Prices are for a 250g bag and are perfectly reasonable, with shipping being either £3.99 for post, or if you order over £15 then shipping is free.  As is customary around here, I chose one of the house blends, the Contemporary.

The delivery wasn’t super fast, it took four days for the coffee to be dispatched after my order was placed, and another couple of days for it to arrive. Hardly the end of the world, but just something to bear in mind if you’re just about to run out, make sure to leave yourself a comfortable margin! 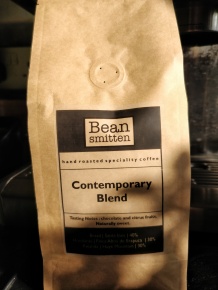 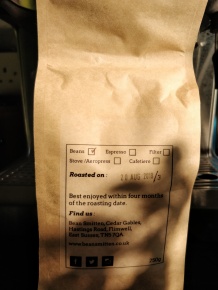 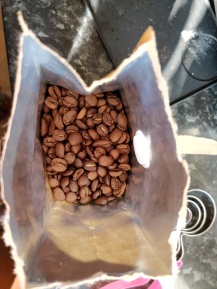 A fairly standard bag, but no way to re-close and no twisty ties to seal it either, so make sure you have something air-tight to decant these into as soon as you open them.  Excuse the shadows in the picture, we had a lot of very bright sunlight in the kitchen that particular morning.

I forgot to take a picture of the shot again.   I really am going to have to print out a picture and stick it to my cupboard at head height.

So how was it to drink? Really, really hit and miss.  I just could not get this thing dialed in properly.  Too fine, too coarse, it refused to make its mind up.  One shot would be fine, the next would be little more than vaguely-coffee-flavoured water even though I’d changed nothing at all between cups! So much of this, sadly, went straight into the sink.  It’s genuinely been a long time since I had this much trouble with a coffee.  I’m used to taking maybe a cup or two to get dialed in, but I just couldn’t get this one to settle down at all, which was really frustrating.

What I did manage to get was…mostly okay? I mean I’ve had plenty worse and it was far from undrinkable but a lot of it came out very harsh, with almost burnt notes lingering unpleasantly in the mouth when made with both hot water or hot milk.  Unfortunately I honestly can’t tell you if that’s the fault of the coffee, or just the fact that it didn’t seem to get on at all well with the Barista Express.

I definitely wouldn’t say don’t buy from them, as there’s plenty of other options there, and I think I need to try one of the other blends to see if it’s my machine or the beans themselves.  If I buy from them again I’ll be back with a re-review and hopefully I’ll have something more positive to say.