This is going to be a quick little review while I assemble the photos from our reasonably successful and definitely fun coffee cupping experience. This was a bit of a spur of the moment purchase and I can honestly say it’s not one I’ll be buying again because Oh.  Oh Dear.

That’s one of the most horrid things I’ve put in my mouth in a very long time.

This is produced by a company called Minor Figures and what I thought was going to be a straight-forward review has suddenly become a bit more complicated as it appears they’re going through something of a relaunch and rebranding!

Originally their website address (if you search for “Minor Figures Coffee”) led to a dead website with just a holding page on it which was a bit confusing.  Now, though, they’ve got themselves a proper domain at – www.minorfigures.com – which leads to a newly minted Instagram account.  Their FB page is alive and well, though again there’s not a great amount of detail about them as a company.

It’s also interesting to note that their Twitter account – @MinorFigures – is also set to protected so that you have to request to follow them before you can view their tweets. I’ve not met a coffee company who seem so determined to make it difficult to find out about them until now!

Along with their new domain, there’s been a re-design of their cans.  Black is out, pastel colours are in!  But as I bought this at the tail end of last year, I had one of the old versions.

They sell through Sainsbury’s, Ocado, Whole Foods and somewhere called Planet Organic. I picked mine up at my local orange-branded supermarket. 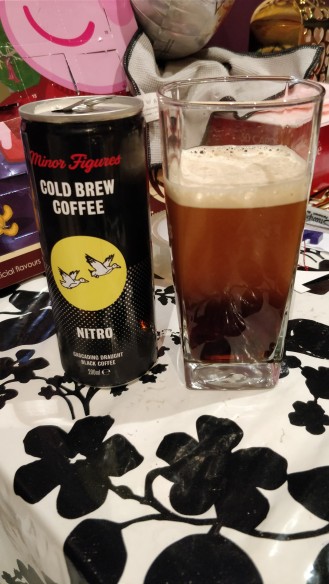 I will admit, the concept of slightly fizzy coffee is one that has my brain recoiling in terror, and the initial pour into the glass did have my eyebrows lifting as you could really clearly see the bubbles rising up through the coffee.  It was around this point that I realised the error I’d made.  I’m neither a huge fan of black coffee, nor am I a fan of fizzy water.  That said, I was determined I’d give it a fair shout.

I have had cold brew coffee made with soda water before, and that was downright WEIRD. It ended up tasting, I swear to you, like liquid jaffa cake. You could barely detect the coffee underneath this surge of chocolate and orange that obliterated any other flavour so I was tentatively hopeful this might be a similar experience.

After letting it stand for a minute or so, we get the picture on the right which, from a distance, could easily trick someone into thinking you’re having a half of Guiness. It’s even darker than the picture, with a thick head of foam.   The smell is…sharp, a bit offputting, it’s an odd combination of smells.

I am sorry to say that this did not taste like jaffa cakes.  What you got instead was a car crash of two strong, competing flavours.  The first thing to hit your tongue is the sour-sweet taste of the water, followed immediately by the harsh kick of black coffee.  The flavours just don’t meld at all, at least not for me!  It’s a very distinct two-stage affair.

Now here, gentle reader, I have to admit I actually nearly spat out the first mouthful it was so unexpected and unpleasant.  I had to psyche myself up to go back in for a second, third and fourth try. Like I said, I was determined to be fair and offer my proper opinion on it beyond just going “EWWW!”.

For me, this just doesn’t work.  There’s no harmony to the flavours at all.  I even tried adding sugar to see if it would mitigate the harshness of the coffee, but it didn’t help. It might just be that Nitro Cold Brew isn’t for me.  The one thing I can say about this is it does have a really silky and smooth mouthfeel which, I gather, is the whole point of the nitro shot so it certainly did its job.

That aside?  Not recommended.